Esteban Chaves is the winner of the Abu Dhabi Tour 2015

Esteban Chaves celebrated victory with his Orica-GreenEdge teammates. The ever-smiling climber, who won two stages and finished fifth at the Vuelta a Espana, has enjoyed a break through season. He is now set to win the first edition of the four-day stage race, which ends with a 110km twilight stage on the Yas Marina Formula One circuit. He leads Fabio Aru (Astana) by 16 seconds, with Wout Poels (Team Sky) at 27 seconds.

The 25-year-old Colombian set up victory by winning the key mountain stage to Jebel Hafeet on Saturday. Chaves attacked alone five kilometres from the finish and distanced all his rivals. Only Wout Poels (Team Sky) was able to close the gap with a paced pursuit. Unfortunately, the Dutchman slipped out on the final corner after sprinting ahead to enter the corner first. 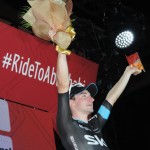 With riders completing 20 laps of the virtually deserted Yas Marina Formula 1 track – each lap being 5.5km – it was Chaves’s race to lose and the Colombian finished in touch with rival Fabio Aru to claim the title.

The 110km stage was raced at twilight, giving the riders a relief from the scorching temperatures they faced during the first three stages.

The stage ended in the dark with huge lights illuminating the circuit. Racing on a closed circuit allowed for live on-board images to be produced and transmitted during the stage due to an agreement between race organisers RCS Sport and the Velon teams.

They opened a two-minute gap and fought for the three €6000 sprint prizes awarded on laps 6, 11 and 16. However, Orica-GreenEdge led the peloton and the chase for much of the stage, with Team Sky and Lampre-Merida also helping to ensure the stage ended in a sprint